How to Make an Upscale Chia Pet Alternative in Five Easy Steps or: ONE MAN’S PAST IS ANOTHER GAL’S TREASURE

So you say you long for the nostalgia of ch-ch-ch-chia…but you want a unique and elegant alternative?  Well read on my sprout loving friend, read on!

If you have a pulse you have probably, at some time or another, either owned a Chia Pet, seen a Chia Pet, or at least seen the Chia Pet commercial.  They debuted in the late seventies and are still made today.

I recently found a treasure that got my mental gears spinning.  It all started when I saw the item pictured below: 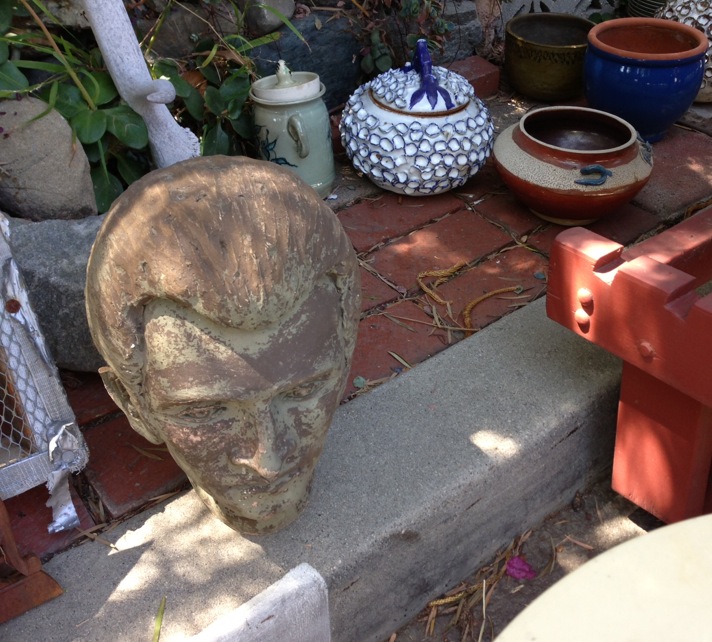 There he sat, at an estate sale in Pacific Palisades, partially obstructed from my view by a table and a set of redwood patio furniture.  I was immediately drawn to this object, for what reason I cannot explain, but I really liked it.  After staring at it for a bit, I realized that the grooves in his “hair” were somewhat reminiscent of Chia Pets and I thought to myself:  “Hey!  I could grow sprouts on that crazy cool head!”  A deal was struck with the proprietress and I was the proud new owner of a well, er, whatever this is exactly.  Not quite a bust, certainly not a statue, but…something!

When I brought it home, my original plan involved Chia seeds.  I even went so far as to purchase some at my local Trader Joe’s.  If you live in a much warmer climate than I, or if you want to grow yours indoors, you could go this route.  As it turns out, Chia seeds need a steady temperature in at least the high seventies for optimal growth.  Night time temps here get fairly crisp, even when the weather is moderately warm during the day, so that was out for me.  I knew I wanted to display this item in the garden.

This was actually a bit of a blessing, because the more I imagined the finished product in my mind, the more I could see that I wanted something a little bit more subtle, a little more refined.  Not that I object to campy or even outright silly, but in this case, it just didn’t fit.  I didn’t want the objet d’garden art to look like a chlorophyll rich Phil Spector, for heaven’s sake!

I had some things left over from another gardening project and I wanted to use what I had on hand. I had some succulents, including a large flat of a fairly small and low-growing variety. After eyeballing them side by side I came to the conclusion that the succulent ground cover just wasn’t going to work.  I very loosely laid it on top just to be sure, but as you can see, it looked flat out redonkulous. 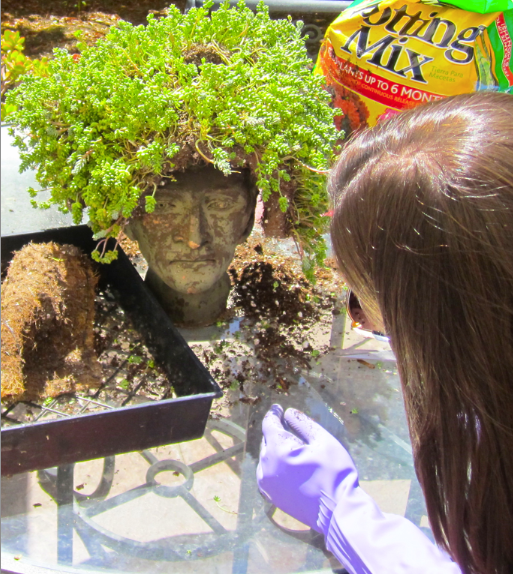 I’ve been a little obsessed with moss lately, so, after a hearty laugh, I went instead with a few different varieties of moss (all gathered from the yard) with a few tiny succulents thrown in for good measure.  Here’s how to make it all happen:

Step 1.  Buy a crazy random item for one dollar.  Mine is a head, but it could be ANYTHING!  You could use a garden gnome, an animal statue of some sort, or something simple such as an orb.  Spritz your item with water. 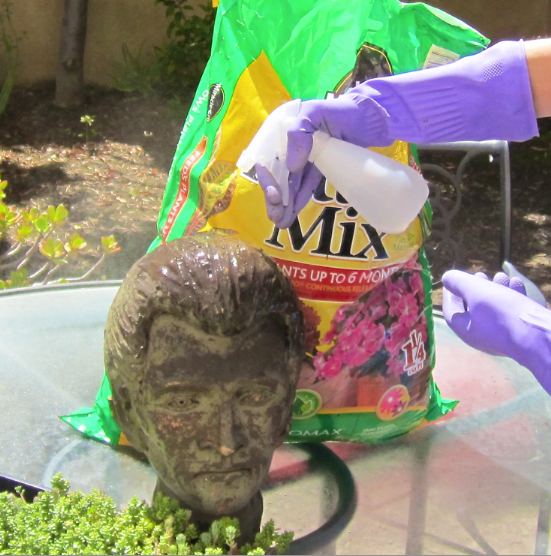 Step 2.  Apply a small amount of enriched soil on the moistened item.  Spritz liberally once more. 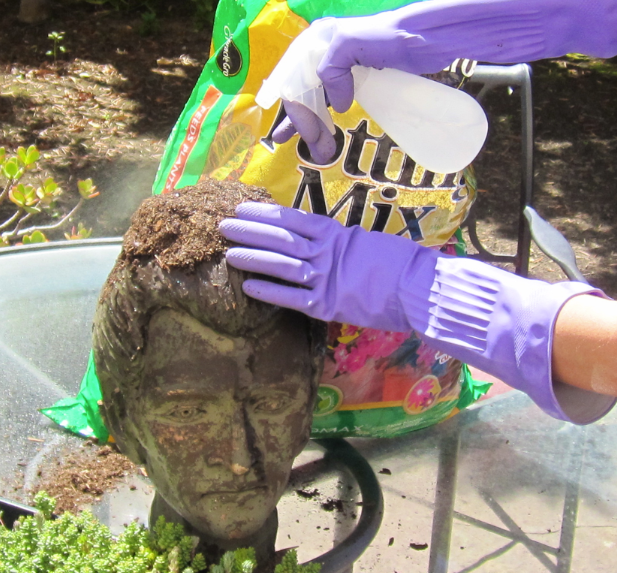 Step 3.  Apply moss in sections, pressing down firmly as you go along.  Spritz the back of each section with water before applying and wet thoroughly after each section is attached. 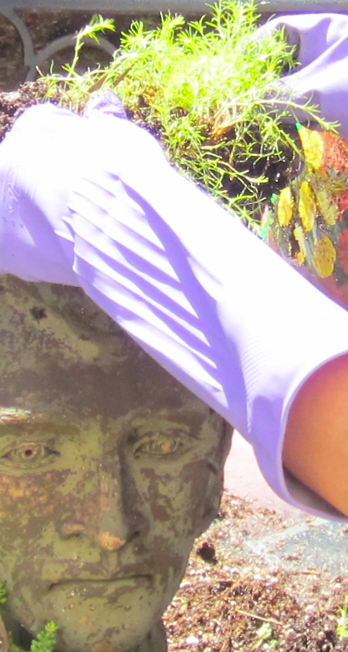 Helpful hint:  Shortly after beginning this project at an outdoor table, I realized that transport was going to be problematic until it was well established (a couple of weeks at least.)  Even though it was a bit awkward to finish everything with the head already on the ground, I set it into place and finished everything up there.

Helpful hint:  I used three different types of moss because I wanted a mottled surface.  I didn’t want it to look too uniform.  Whatever type you use is up to you.

Step 4.  Add a few random succulent pieces.  Base the size of your pieces on the size of the item you’re using.  Mine were quite small.  Succulents are very hardy and quite resilient.  I grow them often by simply breaking off a piece from one plant and shoving it into a pot or the ground…AND THEY ACTUALLY GROW!  No need to root them in water, just let ‘em go at it! 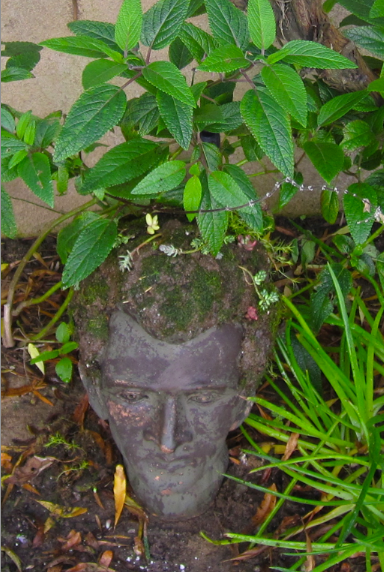 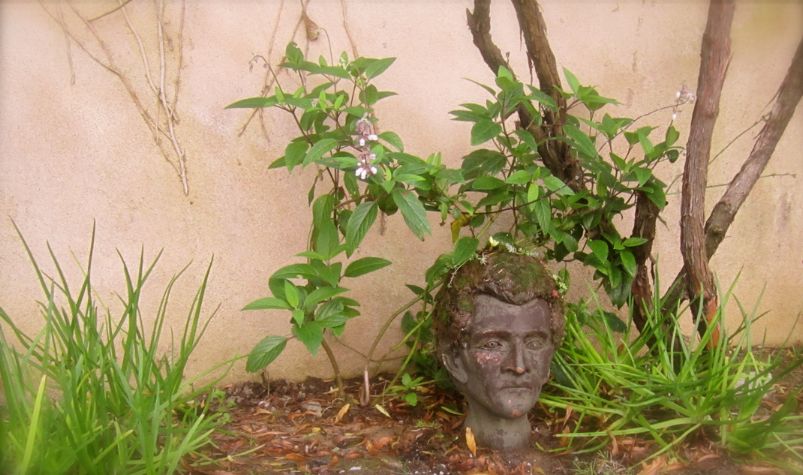 It is important to keep your item well watered for the first few weeks.  Once it takes firm hold you won’t need to be quite as vigilant.  Moss needs very little water and can tolerate more than you might imagine.

After I finished mine I decided the neck looked odd because the ground around it was so bare.  My garden is a work in progress…other than some trees nearly everything in the yard was dead, with no grass, etc.  Since I’m renting, I am keeping my budget as low as possible in the back yard.  So far I’ve found some plants at yard sales and done a few things, but because the ground is still empty overall, I just thought the head needed a little extra something.  Using some moss and unplanted succulents from another project, I filled in just a bit around the base. 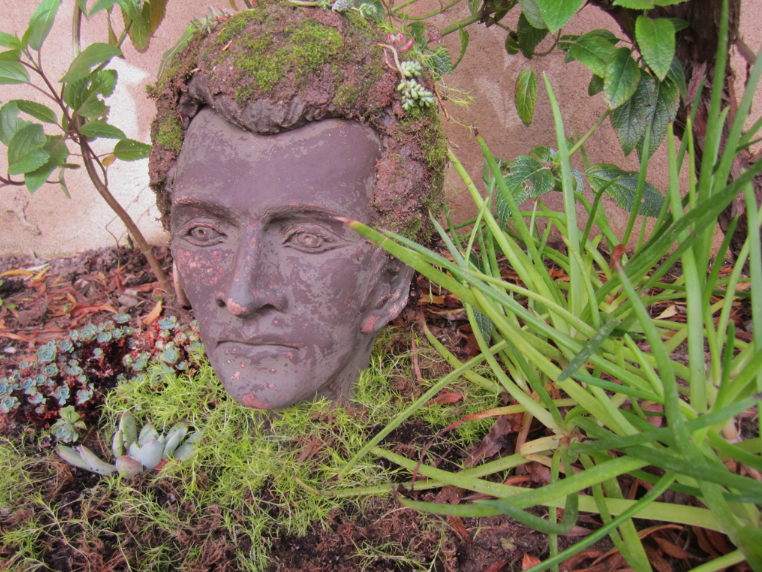 Another alternative is to “paint” your item with a moss sludge (I actually went back and added just a bit after steps one through five, just for good measure.)  I wanted instant results, at least to some degree (it will still have to grow in and really fill in, this is just a start), so I didn’t use solely a moss sludge, but for details on how to go this route, check out the following link:

Now that you’ve seen how to make it, I’d like to tell you a little more about the history behind it.

After completing the transaction, the woman running the sale and I chatted further, and details began to emerge that made my recent acquisition seem all the more precious.  What follows is the Reader’s Digest Condensed version of the story that she shared.

Her parents, both from the Ukraine, met in New York and fell in love.  Her mother, a free-spirited creative type, was an avid gardener and artist.  There were examples of her pottery throughout the sale.  The items she had amassed over her life were varied and interesting.  Some of them rough, some of them refined.  Most of them interesting.  The head was made by her mother and the model was her father.  Sweet story.

Now I am loving this item more and more.

Then she continues.  Her parents (separately, having not yet met) left the Ukraine during the Holocaust.  Her father’s story was compelling.  When he was a young man, he was rounded up and packed into a train car with over 100 other Ukrainians.  Everyone on the train was a stranger to him, with the exception of his lifelong best friend.  He and his fellow captives saw little avenue for escape.  The train was speeding along, far from any town, the doors were locked and the only ventilation on the train car was a TINY window at the very top of the wall, near the ceiling, far out of reach of all on board.  The general consensus was that all was lost.

Against the advice of his fellow prisoners he and his friend were determined to attempt an exit through this tiny window.  First his friend, and then he were boosted up by some of the others on board and managed to wriggle through the window.  He was knocked unconscious when he hit the ground for, he believed, over an hour.  His time estimate was based on the frequency with which trains passed through the area and the fact that the noise of an approaching train is what brought him back to consciousness.  Realizing that being spotted by a passing train meant likely death, he scurried away from the tracks and into a wooded area as quickly as he could manage.  He was unable to find his friend, because the train was going so fast that even going one after the other they were far apart.  He never saw his friend again.  He never knew if his friend survived the fall, if he did whether he was able to find his way out of the country or whether he might have been found during his attempted escape.

But the woman’s father did escape.  He left his home and came to the United States.  He met a crazy, quirky and beautiful woman.  He took her to southern California for their honeymoon and she refused to ever leave again.  Refused.  He went back to New York, packed their things and drove back across the country…WHILE SHE STAYED IN CALIFORNIA (this gal wasn’t kidding folks!)  With no job, no home, no clear plan.  He just leapt.  Again.  And when he told the story to his children, or to friends he told the story with laughter and love.  He cherished his quirky wife and her headstrong attitude.

He bought a home, raised his children and lived his version of the American dream.  Because he took a chance, because he flung himself from a speeding train, flung himself into an unknown country and flung himself willy-nilly into his life with his family.

I didn’t ask how he died (it was a true estate sale…both parents were gone) but we know how he DIDN’T die.  It is estimated that upwards of four million Ukrainians were killed in the holocaust.  This man wasn’t one of them.  In the face of one of the ugliest examples of what mankind can be capable, he survived.  And he didn’t become ugly simply because he had experienced ugliness.  He loved.  He lived.

Well, in this case, one person’s past has become another person’s treasure.  It’s not just another purchase…it is something which will BE treasurED.  It’s a Chia Survivor!  A Chia Hero!

And just in case you are wondering if my repurposing this piece into garden art is disrespectful in some way, I told the woman at the sale (before she told me her parent’s story) what I had in mind and she was 100% on board.  After hearing the story I mentioned that now it seemed a little, well, frivolous.  She disagreed.  She thought her mother, especially, would have loved it.

I know that every time I look at “the head”, I will be reminded of the journey that lead it to my garden.

Fling yourself headfirst at life people!  You never know who you will touch along the way, or even after you’re gone.  Make all of those touches meaningful…touches for which you know you’ll be proud to be remembered!

6 thoughts on “How to Make an Upscale Chia Pet Alternative in Five Easy Steps or: ONE MAN’S PAST IS ANOTHER GAL’S TREASURE”