So, you say you can’t afford Christmas presents?

HOW TO TURN A BLUNDER INTO WONDER

Yesterday I shared how I think when I miss out on a bargain I’ve seen.  Today, I’m going to show you what my daughter did under similar circumstances.

My daughter Hadley’s favorite part of Christmas is watching other people open their gifts.  I know, but you can roll your eyes all you want…she really means it.  Even when she was a young child she wouldn’t ask for anything.  She was so wrapped up in the giving that she forgot to care about the receiving.  I don’t know what I did to be so lucky, but I have a really amazing kid.  Every year she spends a great deal of time on gifts for her friends and family. 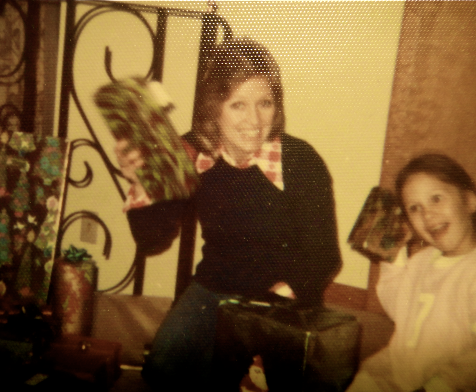 (My mother and me…check the rockin’ collar on Mayme’s shirt, y’all.  Pretty sweet.)

This year, due to circumstances beyond our control, for the first time ever we won’t be with family and she and I won’t be opening gifts on Christmas morning, but we’ve found a lot of other ways to make the season special.  For one thing we’ve saved up several weeks of “The Soup” without watching and we’re thinking marathon!  Oh Joel McHale, you wise-crackin’ tall drink ‘a water, you’re gonna save Christmas!

Hadley created uniquely tailored gifts for all of her friends, things like mix cds (with her own custom artwork) and other homemade gifts.  For one friend she wrote a story customized just for her.  For one friend, a fellow “Doctor Who” fan, she made two medallions from Shrinky Dinks paper, each in Gallifreyan (if you don’t know what this means, trust me, you don’t care), one which translated into ‘Buddies’ and the other into ‘Space and Time‘. 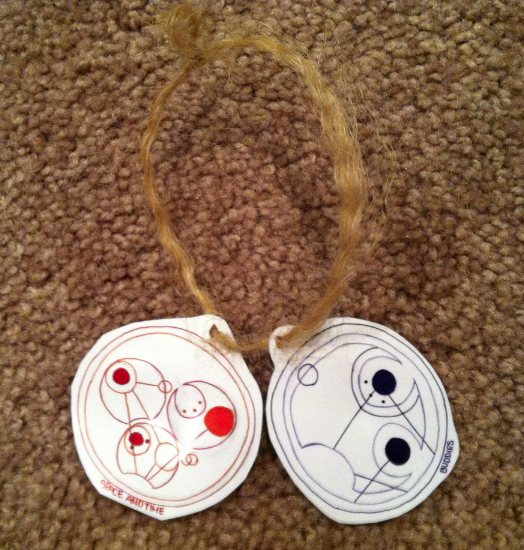 There was one gift, though, that she really wanted to give to her good friend Lexi Rose and that was a Harry Potter wand.  A Harry Potter item which required retail goods.  Lexi loves Harry Potter and Hadley was set on giving her a wand.  Nothing else would do.  Not long after she told me this, I was in a Goodwill store and found, of all things, a Harry Potter book of posters and inside the book was a wand!!!  What are the odds?  Hadley wasn’t with me, she had walked next door to get something to drink, but I went to get her, asked if she wanted it and we rushed back.  I was gone maybe three minutes.  MAYBE!   Well, of course you know where this is going.  it was gone.  Vanished.  Snapped up by another shopper.  We scoured the store just in case, but to no avail.

Obviously we were disappointed, but nothing was going to keep Hadley from handing over a wand to her friend on the last day of school before Christmas break. This kid puts the T in tenacious.

Finally it was decided.  She would find a tree branch (see last Friday’s post…we have nothing if not an abundance of yard waste) and fashion a wand herself.

Other projects were completed and the gifts wrapped, some even delivered.

Now began the last minute crunch.  My daughter is wonderful.  She is kind, she is compassionate, she is creative…aaaaand she can occasionally fall into the trap of procrastination.  Procrastination makes me nervous.  It makes me so nervous, in fact, that seeing someone put things off is sort of like watching a horror movie.  You just KNOW that vapid, nearly topless cheerleader isn’t going to find the quarterback behind the locker room door.  But you have to watch her walking blithely toward her doom, unable to change the course of events.  So, as the days went by, I would open my fingers from where they covered my eyes and peek out…hoping to see progress.

It is my humble opinion that nagging children is by and large not only a worthless endeavor, but when it comes to something such as this, unwise as well.  Hadley is who she is and, She’s not me.  She needs to live her way.  Much like my incredibly talented cousin, she often proves to thrive and prosper in that squeaking in just under the buzzer, last minute slide into home way of operating when it comes to projects.  Both of them manage this in a way that I cannot.  Nerve-wracking?  Yes.  Impressive?  Also, yes.

Around 10pm on the last possible night, as Hadley was wrapping the second to the last gift, she went to find a stick and asked:  “What knife should I use for whittling?”  WHAT KNIFE SHOULD SHE USE FOR WHITTLING?  Um, unless we have a stash of Andy Griffith knives about which I am unaware, we don’t have knives predesignated for whittling, and as much as I like Lexi, she’s a really great gal and all, I wasn’t really on board with the bread knife meeting its early demise for the sake of the wand. 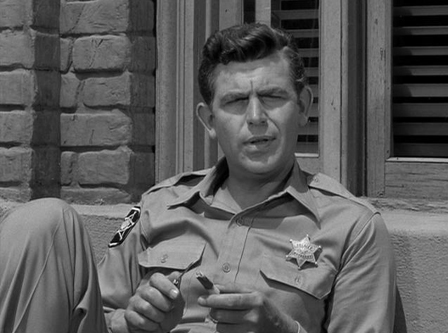 Well, apparently, that was 50 points from Hufflepuff for me, but I redeemed myself by suggesting a pocket knife, which we happened to have, thanks to my grandmother (yes, REALLY, my grandmother) and Hadley set to work.

Her plan was to whittle the branch into the shape she wanted, stain it and apply a coat of polyurethane.  The late hour left that plan an impossibility, due to dry time.  So what did Hadley do?  She put a coat or two of clear nail polish on it!!  It looked AMAZING!  Then she added red Swarovski crystals on the end (Lexi is team Gryffindor all the way.)

You might think that she would have stopped there.  YOU would be as mistaken about that as that poor cheerleader was about NOT running into a slow, scary dude in a hockey mask.  Hadley took the box from a roll of parchment paper, covered it in white paper, printed out an Ollivander’s label (if you’re not super nifty cool and knowledgeable like us, Ollivander’s is the wand shop in the Harry Potter books) and added that to the box.

Did she stop there??  Nope.  She then wrote a bit about the provenance, history and significance of the wand, printed it on heavy vellum-like stock in a font that looked like handwritten script, rolled it up in a scroll and tied it with twine.

THEN she was finished.

It was sweet.  It was special.  It was one-of-a-kind.  It meant something.  But here’s the part that’s most impressive:  It was nicer and better looking than the one we missed out on at Goodwill the week before.

I wish I had better photos.  It was late and we were both tired, I snapped a few with my phone,  They look terrible, but believe me, it looked like a million bucks.

So the next time you miss out on some material object and you’re kicking yourself…kickstart your creativity instead! 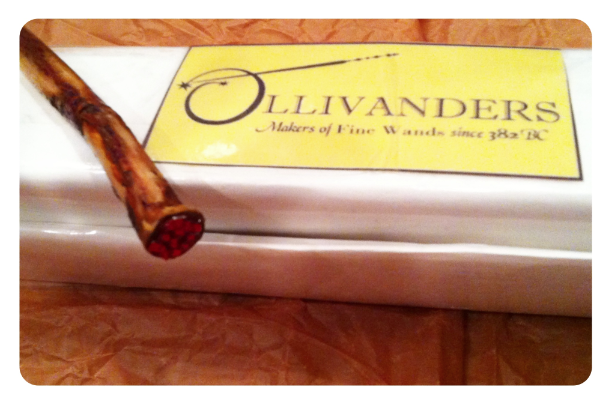 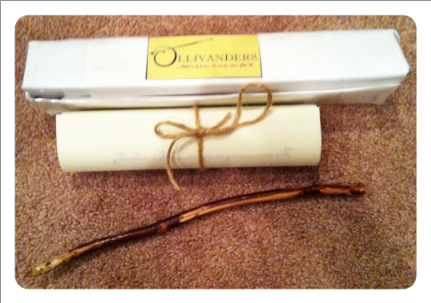