The Holidays: A Decoration Conversation

So you say you want to tart up your house for the holidays, but you’re not a fan of ‘effort’?

For those of you who want your home to have the appearance of one touched by the magic from the shimmering wand of a benevolent Christmas fairy, but who have minimal time, creativity or interest in putting your back into the endeavor, I have a few simple projects, most of which take mere moments to implement.  You can whip out a few of these designs and be back on the couch, pounding back a bowl of Cinnamon Toast Crunch and watching The Cartoon Network before you can say Burgermeister Meisterburger.I had all but decided to skip most of the decorating for Christmas this year, when last minute I threw together a couple of trees (see my next post!) and then felt inspired to go a little further, as I knew I would have people over during the holidays.  Other than greenery, which was gathered in advance, most of this was thrown together from things I had on hand and most projects took only a few minutes each.  I wasn’t going for something out of the pages of Veranda magazine, just some simple additions to each room that would make the house feel more festive.

1.  Let’s start with the most simple.  Fill a glass container (large vase, urn or bowl) with ornaments.  I find that if they vary in size and/or color/texture they’re a little more visually appealing, but there is something to be said for a jar filled with small silver or gold ornaments, all the same size and color.  The latter is better for folks who have decor with a more contemporary feel.  You can’t tell in the photo, but I nestle  a candle inside a glass container larger than the candle itself in the center (leaving empty space above it, obviously) and it adds a glow that emanates from between the ornaments and is absolutely beautiful.  I accumulate these through the year at yard sales and thrift stores, so that I can choose only the ones that I really like and at the best price.  Otherwise you’re stuck in an angry skirmish over the last two boxes of crappy ‘shatterproof’  (read: plastic) ornaments on the shelf at Target, fighting off a mean broad with two caterwauling children in her cart and something to prove.  So tell me how you’re going to explain that black eye to your Aunt Ruth at Christmas dinner?  “Oh, this?  I walked into a door…at Target…FIGHTING OVER CHRISTMAS ORNAMENTS!!”  Save yourself the time, the black eye and the uncomfortable conversation and plan ahead.  You have all next summer to watch for them.
Cost for me this year:  Zero
Cost for me based on accumulating items over time:  The one pictured cost me 3.75 INCLUDING the ornaments, the glass bowl, the candle and the driftwood.
Cost for you:  If you play your cards right next summer, only a few dollars per container at most. 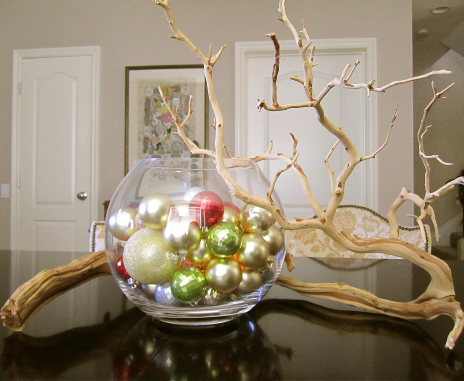 2.  Most Christmas tree sellers will give you the bottom branches they cut from trees before they are sent home with the consumer.  Two large branches should be more than enough to fill several vases to place around your home.  In the best case scenario you will have more than one type of greenery (say, Douglass fir and cypress) but one will still be pretty if that’s not possible.  Make one or two large arrangements, for the living room and dining room, and possibly a third for your kitchen if you have plenty of counter space.  For the rest of the house, use smaller vases, or even pretty glasses (for instance tiny vintage juice glasses) and set these on bedside tables, bathroom countertops, etc.  I even put one in my laundry room, because hey, why not?  If you want to step it up a notch, pick up an inexpensive bouquet of flowers (Trader Joe’s has fantastic deals on cut flowers, if you have one in your area, if not, try a floral supply house) and pull a few stems for each arrangement and add them to each vase, tucked into the greenery, just to add some color.  If flowers aren’t in your budget, you can tuck in an ornament or two, depending on size, add some pine cones or even some bare branches, either in their natural state or painted.  This year I kept mine simple, they’re just pine (see above for my commitment to a lack of effort during Christmas 2012), but the sky’s the limit.
Cost:  Cost for me this year:  Zero
Cost for me based on accumulating items over time: The vase pictured cost me two dollars.
Cost for you:  Anywhere from ZERO to five or ten dollars, depending on vessels you already have on hand and the optional supplemental floral arrangement. 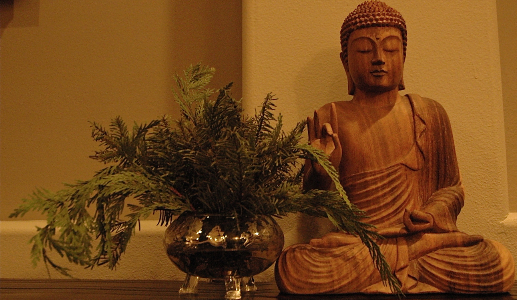 3.  Use vintage ornaments in unusual places.  I have one in particular,  made from felt, (an impish little angel) and in the past I liked to nestle her in a basket of towels.  Position a few shiny orbs on a tray on your coffee table. You could hang an ornament from every other shower curtain hook to hang in front of the shower curtain (make sure they’re unbreakable, because they will be likely to hit one another when the curtain is opened and closed.)
Cost for me this year:  ZERO
Cost for me based on accumulating items over time: 50 cents for the ornament pictured.
Cost for you:  Free if you already have some, a few cents to a dollar or two if you find them at yard sales or thrift stores. 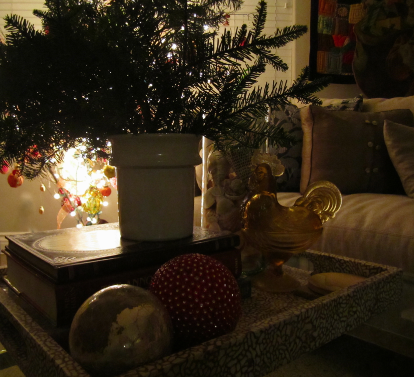 4.  Tie a bow and/or jingle bell to your dog or cat’s collar.  It’s a classic that never goes out of style.  You can be sure they’re on board when they scratch at it or flail and rub against the carpet after you attach it.  It’s their way of saying thanks!  I’m kidding of course, that would be silly…put them in a red and green I heart Santa Paws sweater instead.
Cost for everyone involved:  Priceless 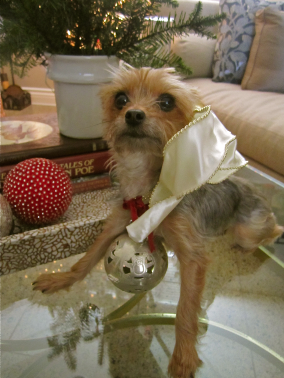 Disclaimer:  I actually really like adding a little something to my dog’s collar for the holidays.  She prances around happily and it makes me giggle.  🙂

5.  Pile lights into a bowl or other container.  BOOM!  Done.  It looks prettier than it sounds.  I have a few birdcages and I have filled each with Christmas lights in different sizes and shapes.  They look lovely at night and are an interesting and quirky take on the traditional look of lights.
Cost for me this year:  Zero
Cost for me based on accumulating items over time: I paid two dollars for the strand in the larger birdcage a few years ago and less than four for the strand pictured in the smaller birdcage after Christmas on clearance two years ago.
Cost for you:  Zero if these are lights you already own, a few dollars if you pick them up at yard sales next summer, or anywhere from five to 15 dollars per strand if you’re buying them retail. 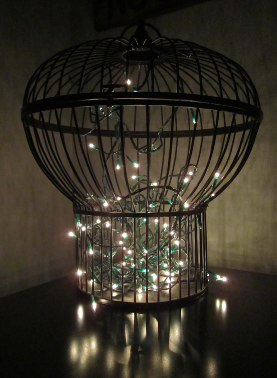 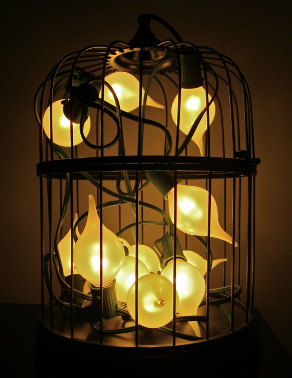 6.  Never underestimate the power of the genuine article, as opposed to artificial.  The day after Thanksgiving, Home Depot was selling garland, at a HUGE discount, for only five dollars per bundle.  I bought one and it now adorns my staircase railing.  It looks SO much better than ANY manmade garland could ever look.  In a perfect world I like a mixture of different pines, but if I can have only one type, I prefer cypress garland, as it drapes very nicely and has an old-fashioned, traditional feel.  It is easier than you might think to install.  I attached mine to the railing in about three places with green plastic zip ties.  I cut the extra ends off of the zip ties and hid them with the garland itself.  I then used leftover flora from the nature inspired tree I created the day before (see tomorrow’s post), added some ornaments, some glass beads and decorations (I’m especially fond of the clip on blown glass birds on garland) and it was done.  It took very little time and looks incredibly high-end.  Be prepared to spend some time cleaning up needles after the installation, but it’s totally worth it.
Cost for me this year:  Five dollars
Cost for you:  Variable, but worth it. 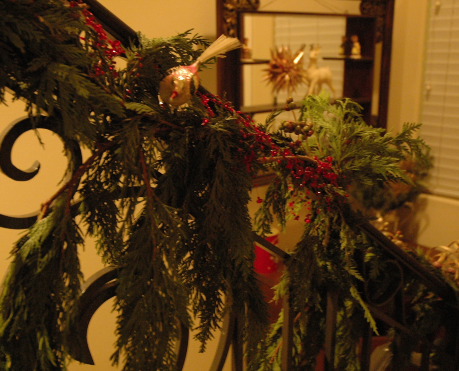 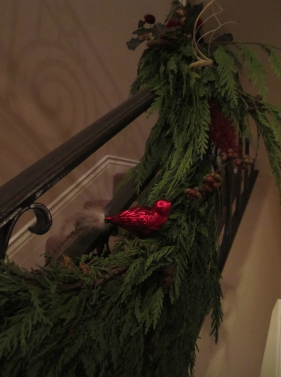 7.  Light a pine scented candle and call it a day.  What with the end of the world right around the corner, don’t wear yourself out.  “A Garfield Christmas” isn’t going to watch itself, and you have a four serving sized Haagen-Daz
peppermint bark ice cream to put away.
Cost:  Five dollars for the candle, 50 dollars or so per month for cable TV and my self-respect. 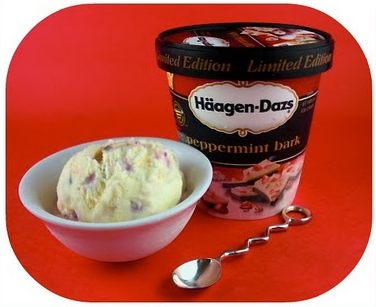 So, there you have it.  Some quick and easy tips for last minute holiday decoration frustration.

One thought on “The Holidays: A Decoration Conversation”